14 replies to this topic 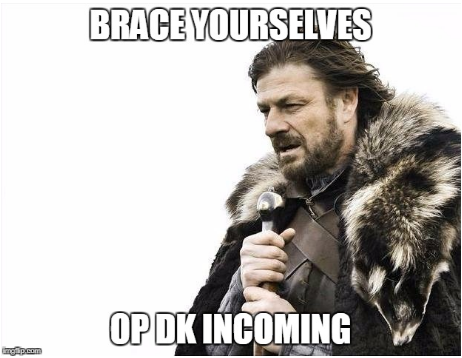 All you need to Know about Dark Knight is Over here~~~~

The Dark knight is basically like a combination of Assassin and Crusader but a little bit  weakened ,Dark knight can be built to a pure GlassCannon or a Tank of All Matters ,They can kill you in less than 20 seconds or They can tank you for Millenia especially if they have +11 , Orange and Boss/Elite Cards

They should also have a slight advantage and disadvantage while riding a mount.
The Dark knight should have a 4-5 Builds depending on which playstyle a players has , I like my self to be more on Attack than Defense hence I choose DK over Crusader.

HISTORY OF DARK KNIGHT
On the Early Era Dark knight was famously Built on the line > Pull-Ice-Squall , a really dangerous combo which everyone feared
Then an Update came killing the skill "Squall" giving it a huge nerf
Most DK where weakened and didn't know which build they should go next , But then a Player , a savior , the almighty Flik came and made the "Fury Rush" Build creating the "FireBuild Dark Knights" and saving the dying breed of Dark knights..
And Then another Update Came not Killing the "Fury Rush" But by giving another way the DK can be built a freshier , a better one , a stronger one , The Pure Crit Dark Knight , The only build which u only need 2 buttons and you kill every players and classes in the game.


HOW TO LEVEL UP DARK KNIGHT AND WHERE?
The Talent for PvE 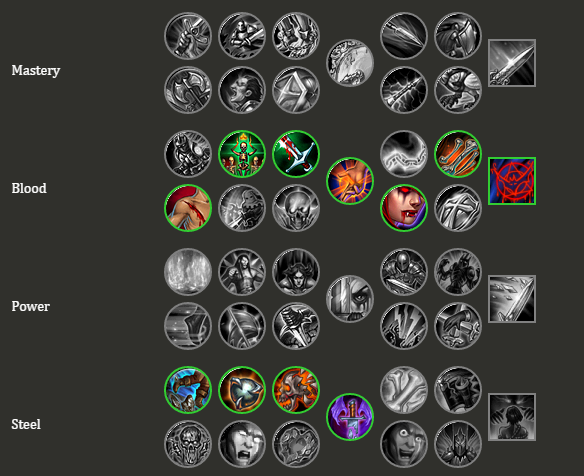 Starting at
•Level 1 - 20 The tutorial should help you most here but try killing some cockroaches ( ask a few high leveled players where to find cockroaches).
•Level 20 , Hit up some few Quest here until u reach level 23.
•Level 23 , Now go and Kill a lot of Moss Eater in Trilakes they give high amount EXP and you can survive against a lot of them since their damage is pretty low , Keep and Eye for Card of Moss Eater they're very valuable and can be sell for a million Gold , killing Moss Eater should be Enough for you to Hit lvl 28 Here.
•Level 28 , Now that you're level 28 you will gain the Skill "Bloody Harvest" the Viable way a Dark Knight can heal himself , now after you reach level 28 you go to Tellerium Tower and kill everything you see there , doing this should hit you to level 30.
•Level 30 , Now that you reach Level 30 here go make some gears Scale Set would be really good for you  , if you don't have gold for making them do some quest or dailies , After of Which you're done making Gears go and set a trip to Andynopolis once you reach there Kill a lot of Sand Harrier (and keep an eye for their Card) But be careful this mob can hit hard , do this over and over until u reach level 35
•Level 35 , Your EXP needed to level up here is pretty high so i suggest  you do Quest now and WantedQuest aswell after you run out of Quest go and kill Sand Harrier , Scorpions and Crabs again Doing this Over and Over should pretty much hit you level 40
•Level 40 - Now that you're level 40 pretty much what you gonna do in this state is do all of the quest exactly Kill this , Get that , Bring ETC, Doing this over and over again will hit you up level 60
•Level 60 - Might consider your builds BELOW

Spoiler
Rating = 11/10 , Curretly the best build for a Dark Knight
The effectiveness of this Build Depends on the
1) Critical Chance
2) Critical Damage
3)The amount of the Attack you have
4)Presence of Bleeding + Plague
5)Crushing Blow and Domination
[The Calculator Is here]

Spoiler
Rating 8/10 , Rarely anyone uses this build anymore , but its still viable
The effectiveness of this build depends on
1)Amount of Attack you have.
2)Your position and ofc your target.
3)Timing of the combo.
4)If the target has no buff (bone armor , protection ETC).
5)the amount of Fury you currently massed
The Calculator is Here

Spoiler
Rating 8/10, Expensive to build but > This build is Broken just look at the Defense , Dodge and Movement Speed , Try and kill this? good luck
The Effectiveness of this build depends on
1) The amount of HP
2) Dodge
3) PvP resistance
4) Movement Speed
5) Defense
6) The ability to Troll everyone that their Class is Garbage
Calculator

Perhaps the Best build you can harness on Dark knight

Spoiler
[Click me to build the Strongest Dark Knight]

•Did you know that the Old squall build was enough to burst a target from 100% hp to 0% in a matter of 2 seconds, ohhhhh pretty scary don't you think?

•Did you know that Dark Knight can easily Solo GT , Ent , BB and Des before they had Limit Timers

•Did you know that Dark Knight can easily Solo GT , Ent , BB and Des before they had Limit Timers

You can still solo GT, ENT and maybe even DES with its Limit Timer. Depends on the gears, skill and maybe luck to avoid trolls (specially on DES).

Nice guide, I like the dodge DK build but I still think 50k HP is a bit too high, you don't need that much. 30k HP on a DK with a high dodge is enough to literally ignore everything on the battlefield, since you can't CC a DK and it will be only affected by AOE damage, and you still has a high amount of constant heals xD

Omg , Someone Wipe my memory off

Omg , Someone Wipe my memory off

Don't need to wipe your memory off , if you have none

Don't need to wipe your memory off , if you have none

Old joke for an old guy )

Now that things have been re-arranged and crit rate has been nerfed and turned to shit, got any new advice?

Now that things have been re-arranged and crit rate has been nerfed and turned to shit, got any new advice?

I am still waiting for the RQ-Calculator to be updated , and then I'll update this build right after.

I don't think that stalker calculator is going to be up-to-date with new patch mechanics. I was told that the guy behind i said it wasn't happening anytime soon.

Well thanks for replying so soon.  I wish there were more guides like this for all the classes. Solsagan and Foster have excellence Assassin guides. You've got this one for the Dark-Knight but there's no decent guide for the others.

I could make some hunter guides, both for my parasite and wolf builds, only if the demand for it is high

I could make some hunter guides, both for my parasite and wolf builds, only if the demand for it is high

Unfortunately for me, I doubt there would be. I don't think very many people consult the guides.

Back to Dark Knight