Love is Aura Around Us: Love Story Contest

27 replies to this topic 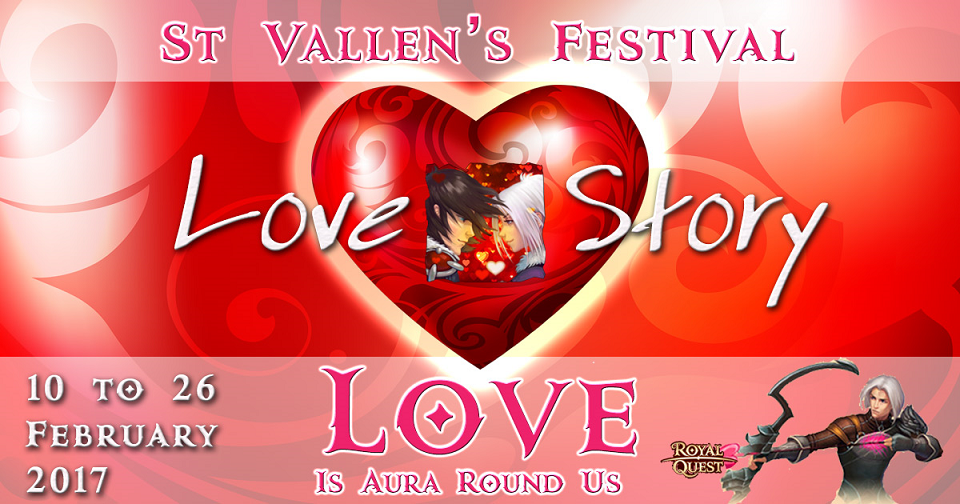 Spirit of Love is empowering our arrows whle St. Vallen's Festival continues its all-embracing reign. Isn't it the best time to tell your Love Story, to share fruits of your imagination - funny, romantic, sad, naive or dramatic, anything you like. You are free to use words and screenshots, artwork and even video - everything to express your mind and heart.

Note that we have several restrictions for your unrestrained fantasy:

Winner will be rewarded with:

We reserve right to choose up to three other stories worth of extra reward: Royal Blessing x3 and 100 Insignia of Distinction.

Also all participants (with valid entries of course) will enter a Special Draw to win Royal Blessing x14 - for ONE winner at random.org draw.

Look around - Love is everywhere!

Enya, what is the Maximum words allowed for the Love Story - cuz I got half a mind to write as much as a book.

Can we use ourselves and other player names in the love story and just feature a couple of NPC instead of focusing only on existing npcs?

Enya, what is the Maximum words allowed for the Love Story - cuz I got half a mind to write as much as a book.

Can we use ourselves and other player names in the love story and just feature a couple of NPC instead of focusing only on existing npcs?

Do you want to invent some new NPC for your story?

Do you want to invent some new NPC for your story?

No need for new NPCs for my story, that would somewhat distance if from Royal Quest.

But thanks for the info, now I cna finally start.

Collaborative with a person if fine correct as long as it's original?

Not so fast, even if I do have interest in writing a love story that doesn't guarantee me victory.

It doesn't need to be a text, you can choose to make art, can be a video or even be a screenshot comic.

There can be more than 1 winner ( knowing how warm hearted Enya is probably all participants would receive some form of reward ) and you also get the chance of being selected for a reward of x14 Royal Blessings for taking part.

Honestly, this all seems like a huge deal for anyone to skip over.

Besides I'm not even 1/10 finished with my story and I'm already facing high difficulty.

Collaborative with a person if fine correct as long as it's original?

Blood is fine within the artwork correct?

Blood is fine within the artwork correct?

Not too much, but yes.

What is true love ? (n.) a love of someone over and over toward something or someone even they are actually hate it or dislike it.

Few people say that, if they already fell it before and few others, explain it opposite moreover full of hatred.

But some of people say true love also a love without hesitate, but other people also agree to dividing love and hesitate. What about force ?

Is it love is a force of life ? They might think as well about love that is not involve willingness or even they thought love is just the part of life.

What a place to go if someone had to force him/herself to feel love, or the only thing they would feel is just a pain and vain ?

That is why there is exist a word called "Hope" ? Is it not a coincidence if people begin to hope if love already jump on them ?

The question start roundabout in people's head, they could be happy and afraid in same time, they might be rapidly cry in the same mistake, they also possibly to hopping around in the same spot.

Does hope is the part of life or part of love ? People will run his life with love and counting with hope ? Or just they wanderer in certain moment for hope everything is going to be alright ?

Since these phrases pops out from people's mind they start to randomly become someone else. But here the fact about true love and hope killing people more than any guns in the world. How possibly that happen ?

Once upon a game placed 2 characters with most terrific system and most happily system, both are brothers and they had thousand or even millions stories than any characters or players.

These brothers nothing just a soulless characters with magnificent power, they could make player mad, cry, happy and crazy in same time.

Player believe that these characters is the character who heard many prays than any church, mosque, etc.

Player believe that these characters is the character who got many cursed words than any jail.

Player believe that these characters is the character who saw many biggest smile than any airport.

These characters very well known by all players, famous all around of elenia.

And any of every players willing to see them again over and over just like True Love, player did cry, did happy, did mad, did crazy for over and over.

There are no other lovely than these both characters and Abel Mitchel's 5 other students around elenia.

What will happen if the story is just over 500 words?

What will happen if the story is just over 500 words?

If your story will have several excess words over 500 - no problem here. We can understand difficulties of translating your imagination into words. Still try not cross the line too much

This is a true story.
This love story couldnt possibly be about anyone else.
It is a story about my son Liam a.k.a. Spaghetti Jr.
I will tell you about how I fell in love with him

It all started one sunny day my lovely wife fell a kick in her stomach.
We both stared at each other with such joy, I immediately ran to put my ear on her tummy.
That day was very hot, but when I felt my baby, it was like rain, so calm and refreshing.
I looked back at her and said: Hey gorgeous, do you think its a boy or a girl?
She looked back at me and said a boy ofcourse. I laughed a bit and said, it has to be a girl no doubt.
We even made this silly bet, which I eventually came to loose.

As the days passed I couldnt help but change the way I saw life.
When I went shopping, I would allways end up in the baby section.
My love for Liam was ever so strong, and continued to grow with each day that passed.
I would talk to him a lot while he listened to Yiruma ofcourse, I would tell him about this amazing game
called Royal Quest and how fun it was, that maybe one day we both could play together,
and create our own in game memories.

I even thought, hes going to be a DK like his daddy haha I was beeing so silly. (Wanted to start getting his gear)
When I talked to him about the game my wife would immediately engange me with the staring contest, wich she would
eventually loose because I allways made her laugh haha.

Time passed by quickly with all of the blessings that were occurring in my life.
He was now fully grown in moms tummy.

Eventually it was time for the operation. I would see Liam for the first time.
I was in love with the idea of my little man beeing born, and how I would be his guide
in life and help him achieve all of his dreams. Immediately I bought books, seeking knowledge
on how I could educate this magnificent young baby. I loved him so much I could not help
but give him all that he deserved from me, and that is my mind, heart, soul and unconditional love.

It was now time to recieve the love of my life. The hospital would not allow me to take part in the operation and be
alongside my wife. Well lets just say that now it was my turn to play the starring game with the doctor in charge.
I eventually won, because yet again, I managed to make another human beeing laugh haha.

What an epic win that was.

I find myself close to the limmit of words I can use. I will end the story saying that
our sons and daughters deserve the best from us, love, attention, play time, words of encouragement, for us to be their guides, and for us to do that first we must love ourselves. Because we can not give that which de not have.

Dont have second thoughts about giving your baby a hug and a kiss when your heart tells you too.
Dont make mistakes that your parents made, the story you child will tell about his first 20 years of life
will be majorly influenced by your pen and ink, because you dad and mom are the primary editors of your babys life.

Liam one day when you grow up and see this post, I want you to know my son
that you are allways on my mind and that there is no other human beeing on this earth that is so important to me like you are.
You are the joy of my heart, the Troll Card that keeps my Dk alive, the sauce to my spaghetti, you are everything to me.

I wish all of you an amazing sunday.

This is my St. Vallens contest entry: I've also made a love story about it about it but Enya said it was too long, but she allowed me to post it in Player Stories.

Keep in mind, the Artwork is my main contest Entry - the love story ( or novel however you wish to call it ) is just an extra to the Artwork entry.

One day Faith came across someone who bedazzled her with his enchanting presence: Master of Enchantment

He made her feel special, promising her everything her heart could ever desire.

Master of Enchantment found Faith’s weakness and made her dark and greedy just like him. Soon Faith ran out of money and Master of Enchantment abandoned her, having no use for Faith anymore.

Broke confused and ashamed, Faith found her way back to Ella. Ella forgave Faith saying love can overcome anything if you love someone enough.

Are you referring to Robert and Amelie? Because those are not the only love couples.

Also tagged with one or more of these keywords: contest, competition, love story, St Vallen